Wild in the Streets

Posted by Steve C. on 1/18/2020 to Down Range - A Collection of Random Thoughts and Ramblings 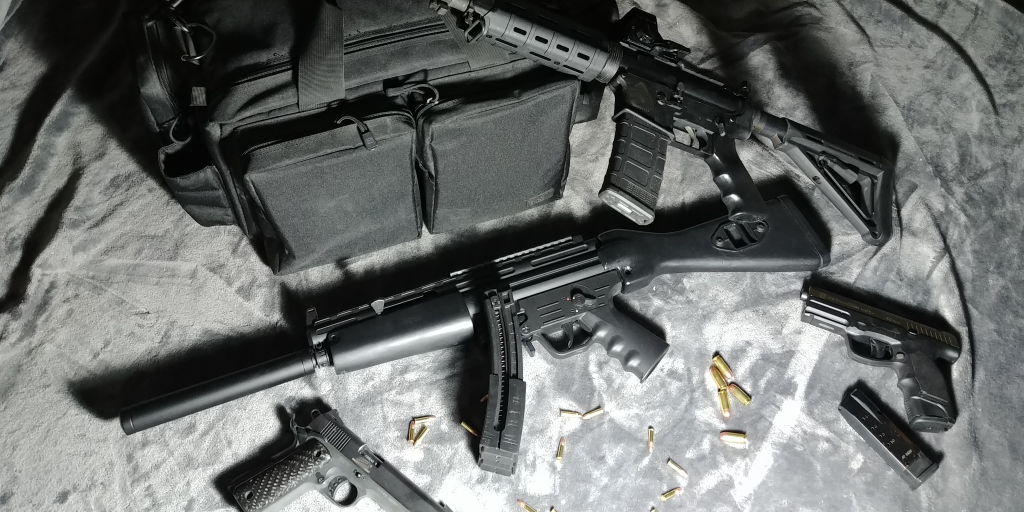 I was sitting in the office after spending the morning at the range.  I had parts to design and the range always motivates me.  There’s nothing like putting holes in paper at various distances on a sunny morning – or watching the sun glint of your .22LR 300 yards down range as it sails 10 feet wide of the target.  I still haven’t mastered the art of reading the wind…And then a scary thought enters my mind.  Did I remember to lock up the guns?

This is it, I thought.  I’ve heard all the stories of these scary black guns running amok and causing all sorts of chaos.  Am I going to be responsible for a firearm catastrophe?  I wasn’t worried about the .22 bolt action as he’s not very strong and probably couldn’t get up the stairs on his own anyways.  The old Cooey 12 gauge is just too old – he’s been retired for years.  The SKS suffers from extreme agoraphobia which I believe stems from him not being able to speak English.  He also drinks a lot of vodka.  Listen, I’m not a proponent of self-medicating, but who am I to judge?  I’m not the one living in a foreign country.

But I also own an AR15 and two handguns.  Those are the ones you hear about!  People want to ban them!  And now they’re on the loose and angry due to the discrimination!  I can just see them working together to access the ammo, which of course is stored separate from the guns.  And you just know the wise old 1911 is calling the shots here.

I don’t know how they can load themselves without thumbs, but there are a lot of people out there who say that these objects are dangerous, so it must be true.  It’s just hard for me to believe because I struggle sometimes to load the magazine for my Steyr M40 and I have two thumbs.  Admittedly, I may not be as motivated as a pistol on the prowl.

But here we are; the trigger locks are off and the safe is open.  These three guns are probably running through the neighbourhood shooting out windows and putting holes in stop signs.  As I don’t have much ammo at home, I expect they will be robbing the nearest gun store of their ammo.  This is the beginning of the end.  My guns are going to see all the guns tied up at the store and they will surely release them all!  I hope at the very least, they will rescue an HK SL8 and bring it home (I love those rifles).

Now that the guns have been liberated, what happens?  Will they run everyone out of town?  I picture scenes from any apocalypse movie.  You know... the shot of the city with buildings ablaze, abandoned cars strewn about the highway…I have to stop this!  I grab my keys and run for the car and head home.  My gosh!  Could you imagine if the car had a mind of its own, like the firearms apparently do?  What if they were in cahoots?

I pull in the driveway, expecting to see the door wide open and the house ransacked, but the door is locked.  This is a good sign.  I quietly open the door and creep downstairs, fully expecting an ambush with each step.  Nothing happens.  The eerie silence sends shivers down my spine, but I push on to the gun room.  And then I see it.  The guns did not escape!  There was no carnage!  No mayhem!

I know what the hardcore anti-gun crowd is thinking – How is this possible?  Guns are evil killing machines! Well, it turns out that they’re not so evil minded.  You know, because of the whole inanimate objects not having brains thing...

But this left me with one question… Who closed the safe and trigger locked the firearms?  Am I wrong about the inanimate object statement?  Are my guns just really responsible and chose to lock their own safe?  Then it dawns on me:  they didn’t do that, because this entire blog post is satirical and I did not leave anything unlocked, because I am a law abiding and responsible firearm owner, and there is no reason to fear me or my hobby.

For those of you who babysit similar pesky firearms, remember to take them out for exercise on a regular basis.

And for those of you who think our legally purchased property should be taken away simply because you say so, Let go of your unfounded fear and get to know us law abiding gun owners.  We’re quite nice.